Empathy and the Fourth Industrial Revolution 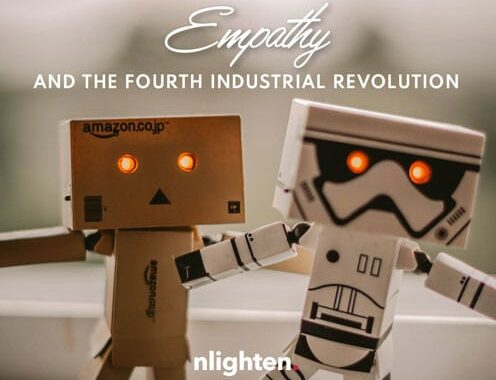 The First Industrial Revolution was all about steam trains and manufacturing, complemented by a second revolution made up of mass production, steel and electric. This was followed up with the self-explanatory digital revolution. And although we don’t have our hoverboards parked up outside just yet, the Fourth Industrial Revolution is on our doorstep.

What Is the Fourth Industrial Revolution?

Blockchains are changing the way we deal with finances, virtual reality will reform entertainment, smart cars may make driving licenses redundant and IoT devices are creating new ways of living. All of these developments in technology are disruptive – but should we be worried?

A Lack of Empathy in Technological Advancement

When those first steam trains were developed in the First Industrial Revolution, they made it easier for workers and products to move around. This helped many in the economy, but towns and villages were bypassed along train routes and their own smaller economies were destroyed.

Today, the Fourth Industrial Revolution appears to have the same lack of empathy for the wider community. Although disruptive technology presents an opportunity for a better world, there is also the chance that driverless cars could cause avoidable deaths, data hacks could be widespread, and  low-skilled workers will be replaced by AI and tech.

The Importance of Empathy in the Fourth Industrial Revolution

Empathy is not a buzzword bashed around over cappuccinos in boardrooms at fintech startups and Silicon Valley headquarters. But it should be. Empathy is what is required to safeguard disruptive technologies from harming society, culture, and individuals.

If engineers and those in charge of creating these new technologies were to engage with people who have issues and fears from them, it is possible that disrupting the status quo can able done to create a better, healthier world – without disrupting peoples’ lives in the process.

Just because you can do something, it doesn’t mean you should. A classic moral argument that addresses this question in the Fourth Industrial Revolution is genetic modification. Medical experts are trying to work out the moral cut-off point themselves, so should they be empathetic and allow the general population to have the final say?

But, Is It Realistic?

Lurking in the background of this subject like a smartphone app sucking your battery is the question: is all this realistic? After all, when corporate companies are racing to be the first to come up with new technology, their motivation revolves around profits and not society.

The truth is it should be customer experiences that matter. You may create a self-driving vehicle, but it is only empathy that will lead people to get inside the car and be comfortable in it. This is why businesses need to be aware of customer experiences and understand how empathy plays a role.