Net Promoter Score: an outdated metric in need of an upgrade 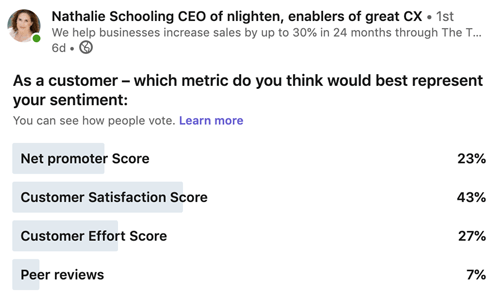 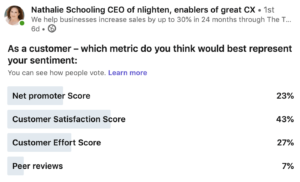 Unless you’ve been living under a rock for the past few decades, you’ll be familiar with the Net Promoter Score (NPS). For many, it will be your ‘go to’ metric for measuring customer satisfaction.

The NPS was brought to us by those clever people at Bain Corporation in 2003. Comprising just a single question, while claiming to offer deep insights into how customers feel about your brand, its apparent strength lay in its simplicity.

Recently, however, research has called the reliability of the NPS into question. Worryingly, it has been found to produce misleading results, overstating the number of customers who are unhappy with a brand. This suggests many businesses are not getting the insights they need. Worse still, it may be driving a wasteful misallocation of resources, as they seek to address problems that don’t exist.

The NPS – a quick primer

We’ve all been asked the question immediately following an interaction with a brand:

‘On a scale from zero to ten, how likely is it that you would recommend us to a friend or colleague?’.

The score we give sees us categorised as either a ‘Promoter’, ‘Passive’ or a ‘Detractor’.

A nine or ten, and we’re labelled a ‘Promoter’. This is interpreted to mean that we’re likely to recommend the brand or product.

Customers who respond with a seven or eight are deemed ‘Passives’. They are thought unlikely to refer others and if they do, their recommendations will be qualified or unenthusiastic. At the same time, ‘Passives’ are considered unlikely to criticise a brand.

‘Detractors’ are customers who respond with a score of six or less. They are taken to be genuinely unhappy, to the extent that they are likely to actively criticise a brand to friends and family, or on social media.

Where the NPS gets it wrong

The problem is, research suggests that most people categorised as ‘Detractors’ are unlikely to criticise a brand. Many may in fact be loyal customers.

ForeSee surveyed 20,000 people categorised as ‘Detractors’ by the NPS. Just 1% said that they would communicate their ‘bad’ experience to others. Further questioning revealed that 60% of so-called ‘Detractors’ were loyal customers who had been using the brand for more than two years and intended to continue doing so.

Overall, the NPS was found to overstate the number of a brand’s detractors by up to 270%. This is a major problem, suggesting serious reliability issues with the NPS.

The impact of this problem has been exacerbated by trends over recent years. Since the NPS was developed, consumer voices have been amplified by the advent of social media, giving unhappy customers the capacity to do serious reputational damage. This has driven an increasing focus on identifying ‘Detractors’ and taking steps to mitigate their concerns. However, given what the research says about the unreliability of this aspect of the NPS, much of this activity (and investment) is potentially misdirected.

Is there a solution?

One solution is to stop using the NPS. Given its lack of reliability and potential to drive poor decision making, this would seem to be a ‘no brainer’.

The emperor’s wearing no clothes, right?

I recently did a snap pole on LinkedIn and found a majority prefer the client satisfaction score (CSS). This asks clients or customers, ‘on a scale from one to five, how satisfied were you with’, an interaction or product etcetera. Ratings are given on a typical five point scale: ‘very dissatisfied’, ‘dissatisfied’, ‘neither satisfied nor dissatisfied’, ‘satisfied’, and ‘very satisfied’.

But what about interpreting the results? After all, this is where the NPS lets businesses down.

The way I see it, the key lesson here is to not read too much into a single number, derived from just one question. Understanding how clients and customers feel just ain’t that easy. A better approach is to look at quantitative data of this type as a guide, which can then drive further research.

As for the NPS, potentially it still has its place, so long as you don’t read too much into the results.

After all, a huge number of successful businesses have been using the NPS for a long time now. Many clearly have faith in it.

What do you think?

If you’re using the NPS and have your own story to tell – good or bad – I’d love to hear from you. As always, you can reach me at nathalie@nlightencx.com

nlighten are the go-to experts to enhance your customer experiences. We offer an array of services to develop effective customer journeys and improve your CX strategy. To hear more about how we can help highlight your value to customers and enhance their experiences,  contact us today!

View the previous nlighten article by Nathalie Schooling: How to inspire the cultural change needed for CX success.